It looks like you're new here. If you want to get involved, click one of these buttons!

Last night at the second to last monthly OMARC Membership meeting of 2017, some who attended got to see the tiny PicoAPRS unit I recently acquired thanks to a HRO gift certificate I won at the annual Society of Cable Telecom Engineers Cable-Tec EXPO I attend annually for professional (bill paying) reasons.

I have had my eye on this APRS device since learning about it from Ralph DK5RAS who I met while debunking the Baofeng DM-5R's inability to function as a true tier 2 DMR radio (thread about that here). Ralph pointed me to his friend Taner, DB1NTO who was the miracle worker behind this super tiny APRS device and I just knew I needed to get one after we went off on to typical ham hobby tangents. The day has finally come!

What is the Pico APRS?

APRS is short for "Automatic Packet Reporting System" which Bob WB4APR developed 21 years ago! APRS takes 1200 baud packet data and allows users to send and receive short messages back and forth along with location and other telemetry data like weather. APRS created a resurgence in the use of packet radio which started decline due to the uptake of the internet, which shifted how many ham radio operators shared data wirelessly for many years before we all had broadband highspeed (or even low speed) internet.

The PicoAPRS is the smallest 2m band transceiver, modem, GPS, user interface and power source in one nice tiny enclosure

Yes, that is a regular size push pin for scale. The antenna attached to the SMA connector I have is bigger than the PicoAPRS unit!

Key Features of the Pico APRS

There are many more details on the Pico APRS website here:

What do I plan to use this for?

This is also much, much, MUCH smaller than MPET and Arduino TNC box I built and we may be starting to see a few new projects for those looking for other things to do with the MPET.

Here is a short video of messaging in action with the Pico APRS. Off to the side I was using the previously reviewed Mobilinkd TNC 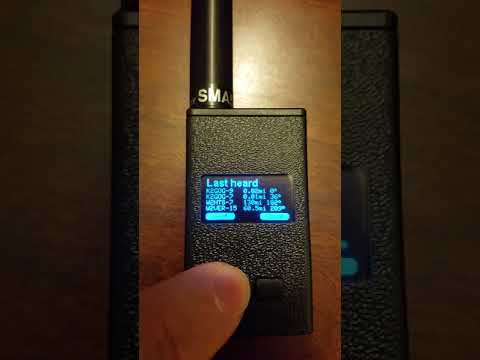 Given all the additional APRS related satellites now in operation, I am getting back into APRS after many years. Look out for a review of the Kenwood TH-D74 in an upcoming review which is a 144, 220, 440 APRS radio with bluetooth, APRS, GPS and Icom D-Star capability. My upcoming review will focus on using pretty much every feature other than D-Star.

Feel free to see where I may be playing around on APRS by looking up K2GOG-2, K2GOG-7 or K2GOG-9 on aprs.fi